After the collapse of the Soviet Union, homelessness began becoming a major problem for the city of Bishkek. Rural people came to the city in search of jobs and without a stable economy, many were forced to the streets. City official numbers state around 500 homeless live in the city, while NGOs estimate the number to be above 3,500 in 2010.

The 69-year-old woman has spent much of the last three years on the streets. In Soviet times, she had a job and a family. But after the Soviet Union crumbled, so did her life. Her husband died and she turned to alcohol for comfort.

Her story isn't unique. Throughout the streets, homeless look for shelter or heated pipes to make it though the negative temperatures of winter.

Click under the video tab to see a three-part mini-doc series on this story. 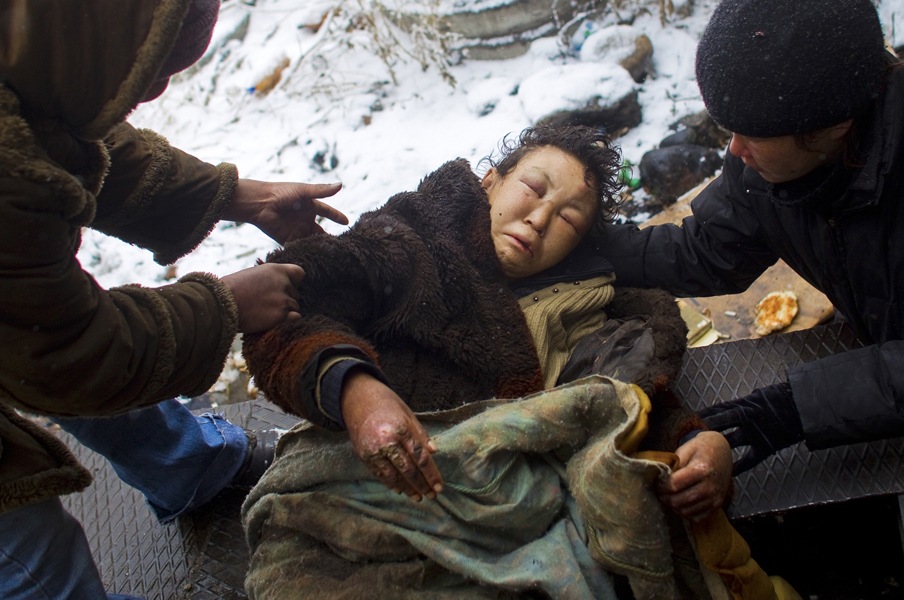 Ayana and Juana help Tamara sit up after she had laid unconcious on the pipes since the night before. They offer her a cigerrete before leaving. Four days later they would return to find her in the same spot with pants soiled and still unable to move. 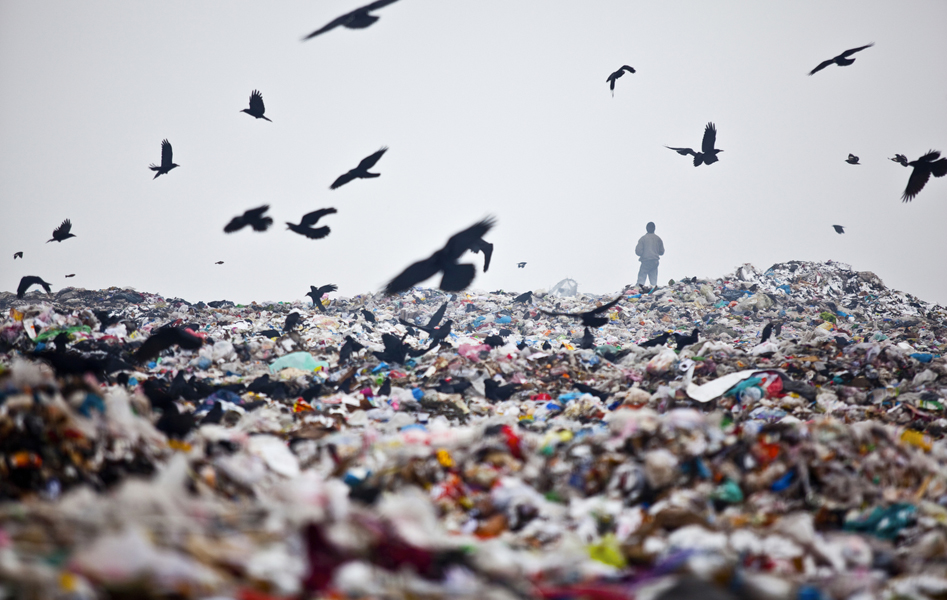 Outside Bishkek, a man stands atop a mountain of trash at the Bishkek Landfill. More than 200 people make their living by taking glass and bottles to a recycling center nearby. The average income is 200 som a day. 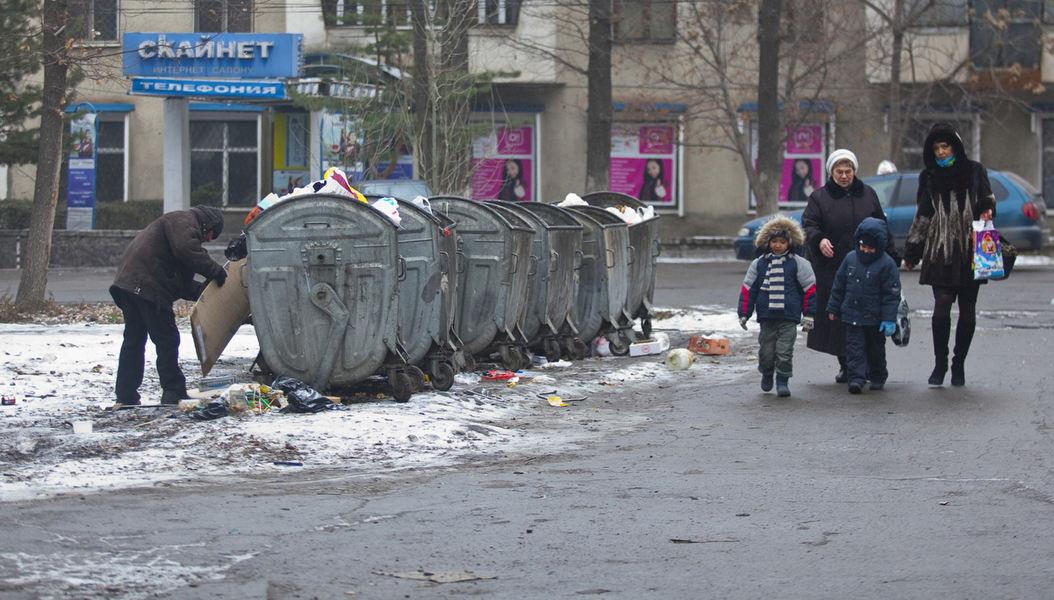 A family carries a shopping bag home as they pass a man digging through the dumpsters on the streets of Bishkek, Kyrgyzstan. The disparity of wealth can be seen throughout the city. 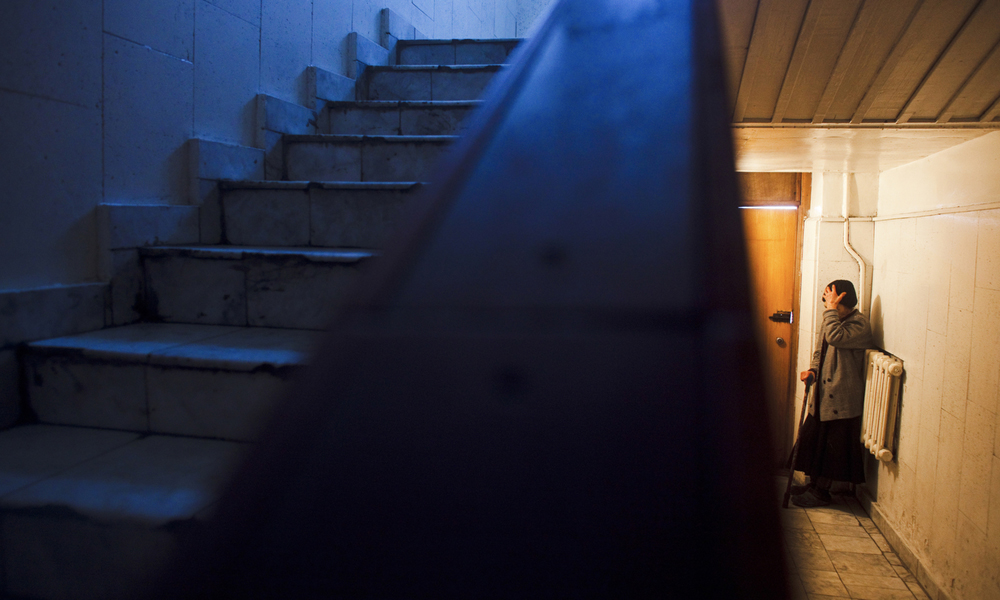 Tatiana Gerasimova, 69, puts her hand on her head as she stands against the radiator to keep herself warm. Gerasimova is blind and uses the 12 years at the shelter and the familiar walls to navigate from her bed in the hallway to the radiator and back. 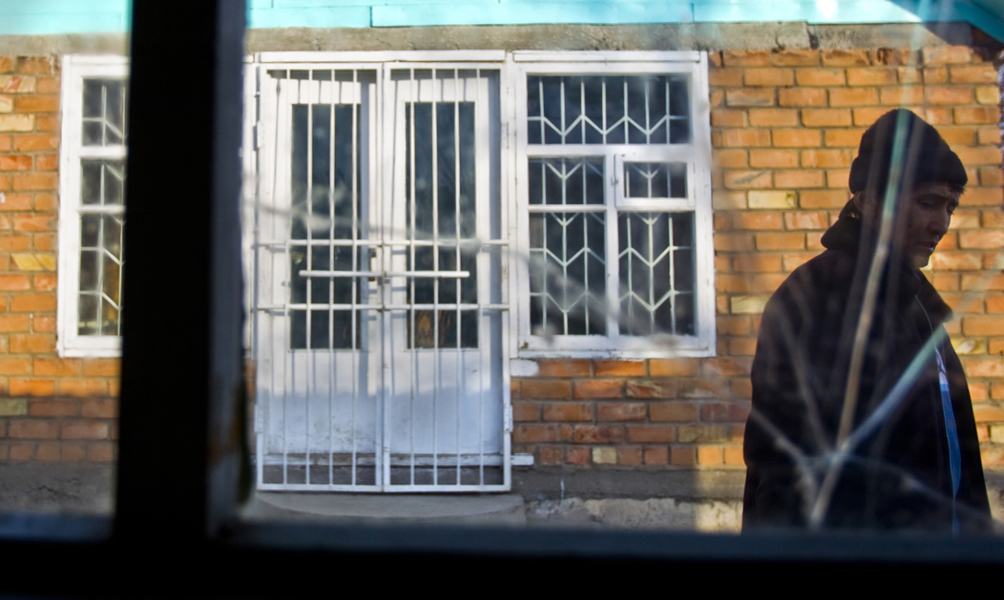 A homeless man walks by a broken window in Bishkek. There are very few options for the homeless in the city. The few charity organizations there are depend almost completely on foreign aid. 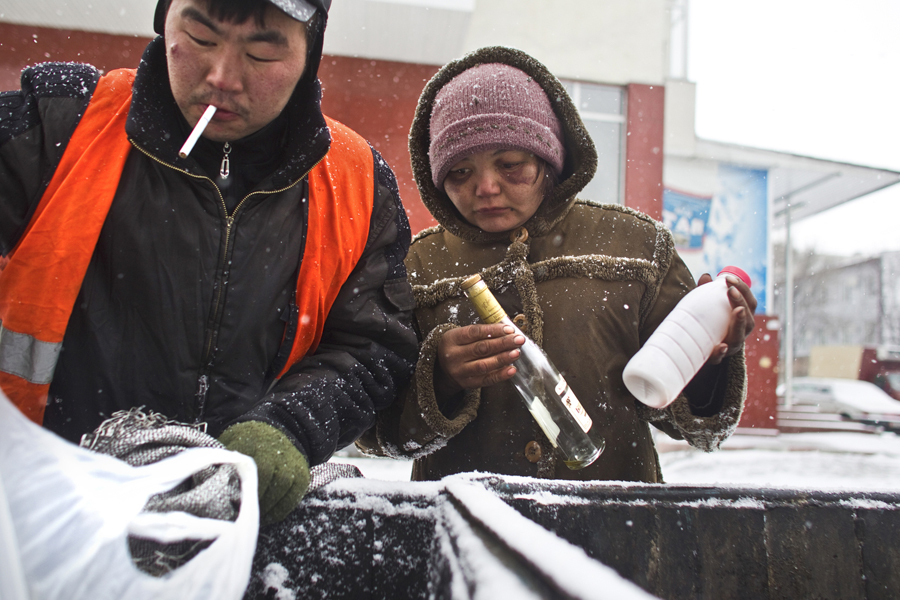 Aziz and Juana collect bottles and plastic from garbage bins behind a shopping center. The two homeless scavenge for anything that they can sell or anything they can use to live. 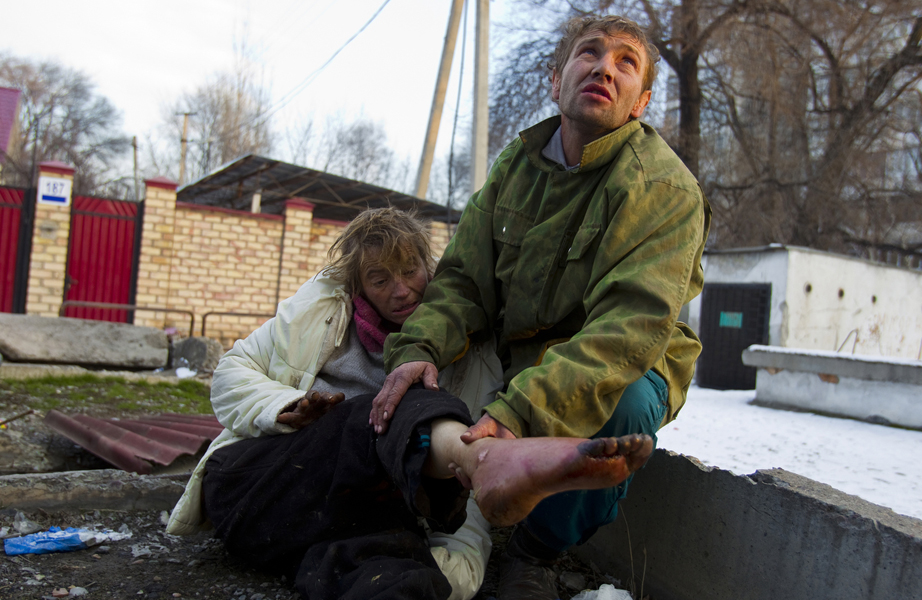 Artur looks to the sky as he holds his girlfiend's Natasha's frost-bitten foot outside the concrete bunker where they live. The two have been homeless for over 5 years. 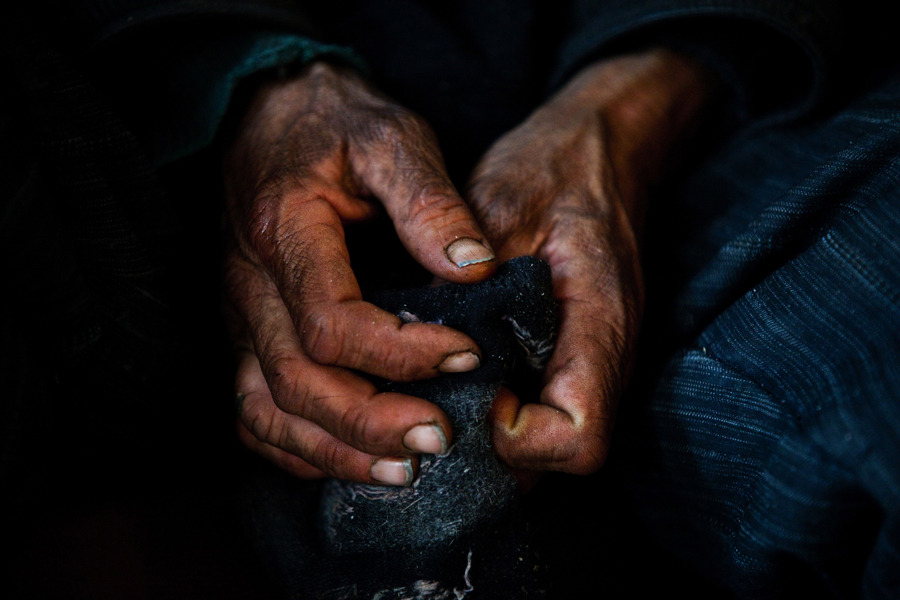 The hands of a homeless man inside a local shelter. 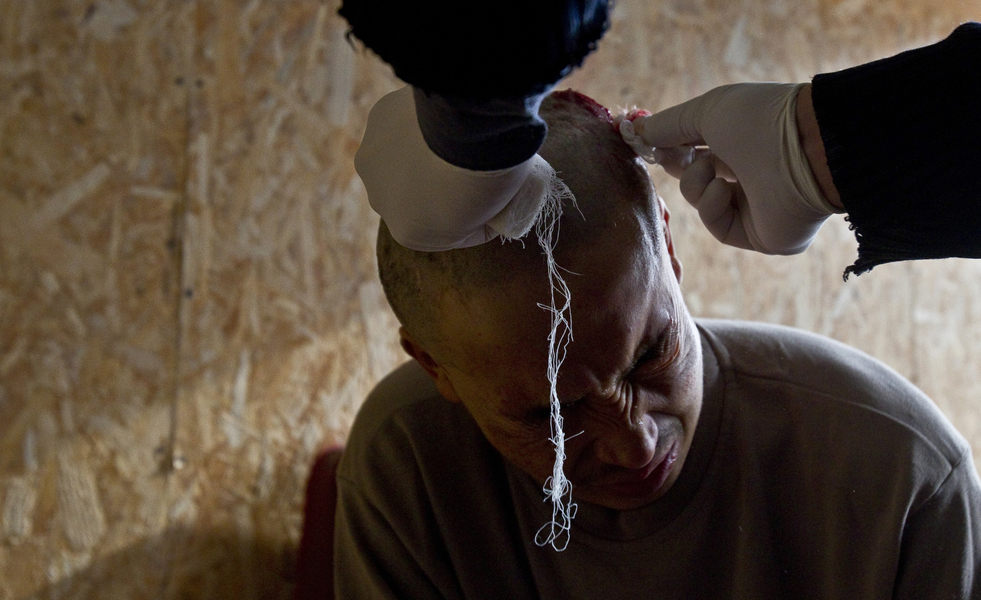 Iman Jeenbaev, 33, has his open head wound cleaned by a volunteer doctor at Fountain of Life in Bishkek, Kyrgyzstan. Jeenbaev, an alcoholic who has been in and out of prison in Bishkek, was mugged and beaten with a crowbar on the streets. 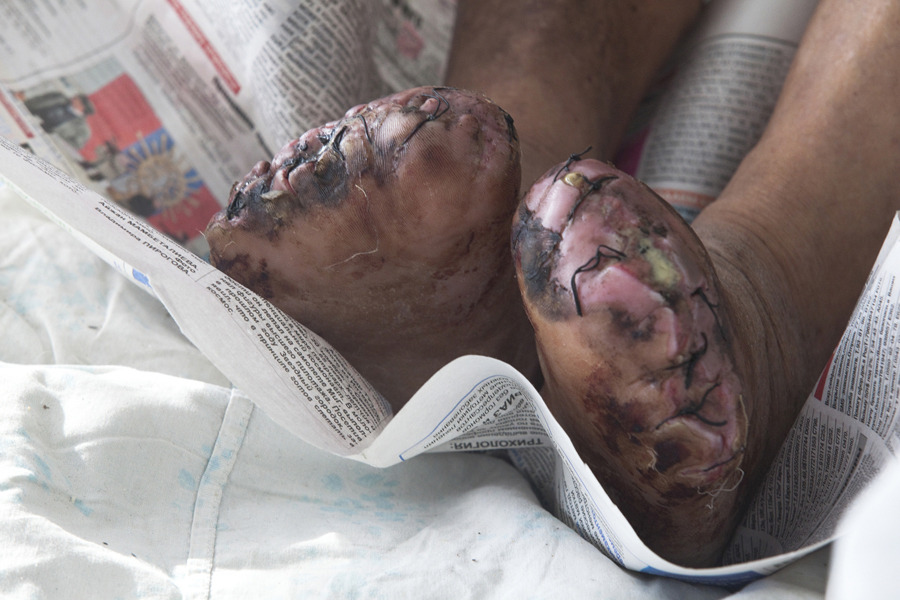 Ana Chirnova rests her feet on a Kyrgyzstan newspaper after they had been amputated due to frost bite in Bishkek Hospital #4. Chirnova had spent the last two years homeless and said her feet eventually lost all feeling from the cold. 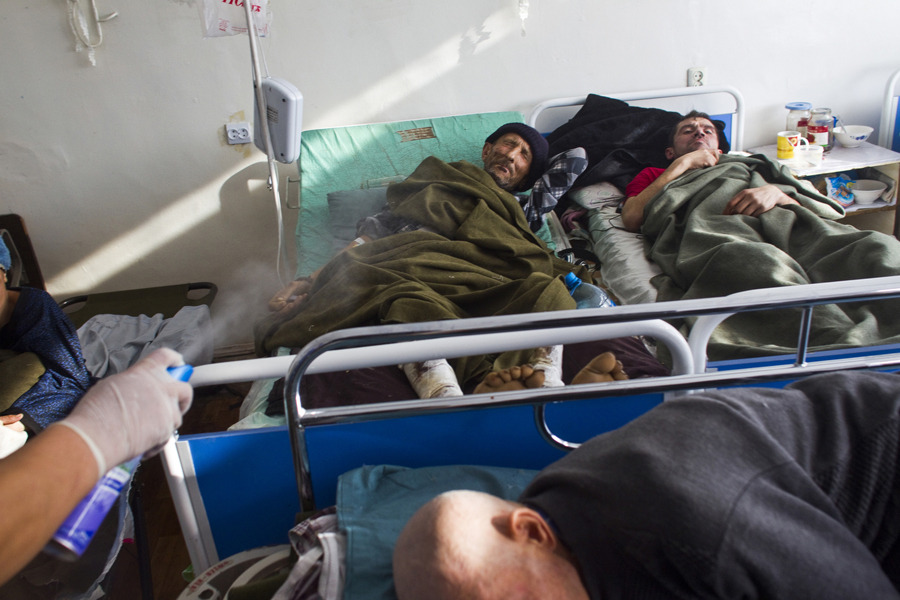 Inside the hospital where the homeless are brought, they stack 12 in a room for usually four people. Because the homeless don't have the money to pay for their visits, they are often treated with little care. The occasional cleaning consists of spraying the homeless with air spray.

Alexander Vladimirovich lays in his gurney bed in the middle of a hospital room filled with other homeless people in Bishkek Hospital #4.